At the entrance to the zendo at the Gendronniere there is a caligraphie of master Taisen Deshimaru reading :

THE HUMAN BEING IS MORTAL

TODAY HE LOVES, TOMORROW HE HATES.

THE DARKNESS OF THE PINE SHADOW

DEPENDS UPON THE CLARITY OF THE MOONLIGHT.

The darkness of the pine shadow depends upon the clarity of the moonlight . . . . . what does that mean ?

END_OF_DOCUMENT_TOKEN_TO_BE_REPLACED

Zazen is practice dating from Shakyamuni Buddha consisting in sitting in silence . The concentration is on the physical posture: knees on the ground , back vertically stretched,head pushing upwards , slow and deep exalation. The thoughts pass like clouds in the sky accepting good and bad without judgement, being just here and now. Going back to the true nature common to all living beings and in harmony with cosmic energy. Like this we can find the great freedom beyond duality . 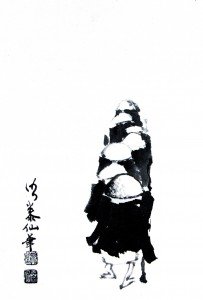 Be linked to this ancient tradition brought to Europe in the early 70s by Master Taisen Deshimaru !

The Dojo Tai Ku An , close to Lagos ,  is run by  a group of people with different nationalities . It welcomes everybody who wants to sit in silence . Practicing Zazen alone is possible , but it is better to do it in group ,  meriting consciously or inconsciously from the presence of others.

The Dojo Tai Ku An  will organize a three days retreat in May with Barbara Kosen , Master in the lineage of Soto Zen .